This exploratory Green Dot mini-case illustrates strategies that one charter management organization (CMO) implemented, in the course of its broader school turnaround efforts at individual schools, to improve special education and related services for students with disabilities. Green Dot and its school-specific efforts highlighted in this brief were chosen based on the following criteria:

The organization had embarked on an explicit turnaround effort and was able to show evidence of positive growth for all students. 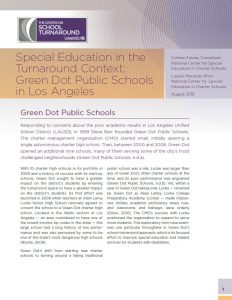